Why More Women Are Putting Off Retirement 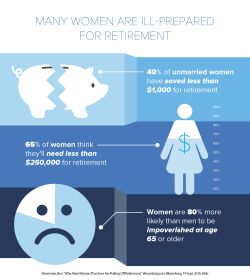 Older Americans are working longer these days, and women are no exception. Researchers have found that older females are opting to stay in the workforce for a variety of reasons—but financial instability might be the most important one:

As a result, many women are facing risky retirement years. One study3 found that women are 80 percent more likely than men to be impoverished at age 65 or older. Additionally, women ages 75 to 79 are three times more likely to fall below the poverty level than men in the same age group. Single women are particularly vulnerable. A recent survey4 found that 40 percent of unmarried women have saved less than $1,000 for retirement.

Experts say education surrounding retirement funds is key to helping women retire. Women often don’t know just how much money they’ll need for retirement: About 36 percent of unmarried women and 29 percent of married women think they'll need to accumulate less than $250,000 for retirement, according to the EBRI survey4. Meanwhile, the majority of men believe they should have saved $500,000 or more.

Working longer can help, but health issues and job loss can often interfere. According to a Transamerica study5, 56 percent of women plan to retire after age 65 or not at all, yet the average retirement age6 for women is just 62. The better plan? Saving early and often, experts say.