New Study: Millions of Americans Have Nothing Saved for Retirement

According to a new study, roughly 1 in 4 workers have saved almost nothing for retirement, putting their non-working years in jeopardy.

That’s dramatically less than what many experts would advise. While nest egg needs vary, a general rule of thumb is that most workers will need savings of 10 to 12 times their current income to retire comfortably. Many advisers recommend aiming for a nest egg of $1 million. 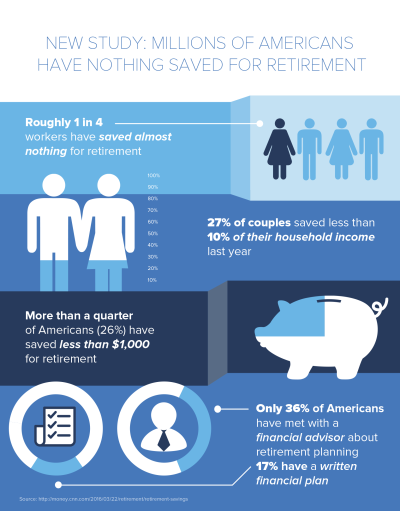 Young workers with little saved right now will presumably have some time to catch up, but they’ll miss out on years of compounding benefits. Older workers will have less time to save and, experts say, may be tempted by risky investments promising unrealistic returns. They’ll likely need to rely almost entirely on Social Security for income.